Africa University has a major role to play in the development of the continent, said the keynote speaker at the United Methodist institution’s 30th anniversary celebrations.

“Let us look forward to all that might be accomplished in the next 30 years. What does AU need to do to fulfill its responsibility in the progress of Africa?” Ugwueke asked.

He noted that the top 10 largest countries in Africa have 740 universities for a population of 660 million, while the U.S. has 5,300 universities and colleges for 333 million. “So we have a long way to go,” said Ugwueke, who is from Nigeria. “As Africans, we must acknowledge that we are not where we need to be.”

He envisioned that Africa University would have campuses across the continent in the next three decades, adding that a more educated workforce would transform the economy and create more wealth and opportunities for everyone.

“To change 1,000 lives through education is good, to change 10,000 lives is better, but how does AU change millions of lives? If we think that is too ambitious a responsibility for the institution, just look at what we have celebrated here today,” Ugwueke said. 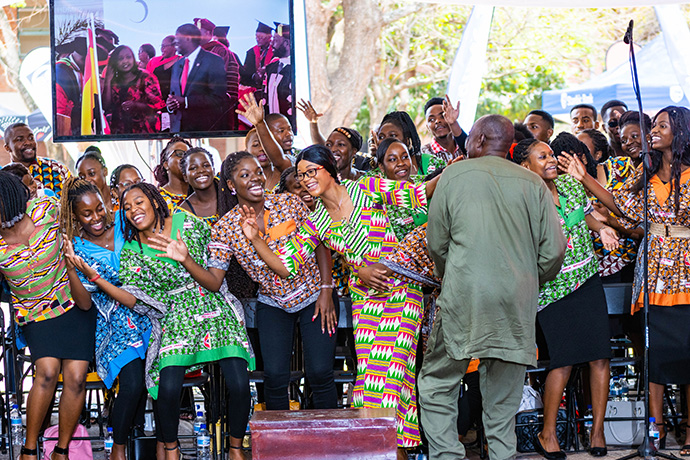 Zimbabwe’s first private university has come a long way from the bold dream in 1898 of the late Bishop Joseph Crane Hartzell, who stood on Chiremba Mountain above Old Mutare and envisioned hundreds of young Africans running to a school of higher learning in the valley.

The Zimbabwe government granted the Africa University Charter in 1991. With an initial 40 students studying agriculture and divinity in 1992, the university has grown to an enrollment of 3,000 in 65 academic programs. Africa University currently boasts of 10,449 alumni from 35 African countries, Europe, South America and Asia. It ranks among the top 100 universities in Africa.

The Rev. Beauty R. Maenzanise, one of the first two female deans of Africa University in 2005 and the second dean of the Faculty of Theology for 10 years, said she has observed the university move from glory to glory.  She said in her current role at the United Methodist Board of Higher Education and Ministry, she is seeing how Africa University is investing in Africa. She is the manager of contextual theological education and resourcing and director of the E-Reader Project.

“Africa University alumni are no longer leaders of the future but today’s leadership,” she said.

“All of the 13 episcopal areas (in Africa) are benefiting from the knowledge these graduates received from Africa University. Not only are they working in the church but also contributing in the development of their societies,” Maenzanise said.

Amos Dobyo, a divinity student from Nigeria and president of the Student Representative Council, said the institution is celebrating infrastructural, technological and scientific developments that benefit students in areas such as accommodation, health care and maintenance and the installation of classroom technologies.

“A lot of our students studied and are still studying under scholarships, which the university provides through its development offices and the United Methodist churches around the world,” he said.

“As a United Methodist-related institution, it is important to state that Africa University is unique not only in the area of delivering quality education but also in building good character.

“I’m proud to say that we have a student union building with well-furnished offices to facilitate leadership with ease. Africa University is student-centered and that is ensured in its policies and in execution of services,” he said.

During the weekend’s festivities, the institution honored four pioneer workers who had served the university since its inception.

“I’m not a man of many words; instead, I let my work do the talking for me. In all my designs, I aim to portray a clear message, and in this design, the Africa University 30th anniversary logo symbolizes Africa University’s 30 years of excellence and leadership transformation in Africa,” he said.

“The logo comprises additional elements, one of which is the utilization of golden wheat. The wheat has a modern vitality and it demonstrates our 30 years of positive transformation and exponential growth.”

To mark the university’s milestone, the Zimbabwe Episcopal Area cabinet, led by Bishop Eben K. Nhiwatiwa, gave a $10,000 gift to the institution.

“We are in the tradition here in Zimbabwe to keep the promise to follow the legacy of our former bishops. Bishop Abel T. Muzorewa gave the land (1,542 acres), Bishop (Christopher) Jokomo established the Africa University Sunday, where local churches raise funds for the university and, recently, we have established a scholarship to send two students at a given time to be trained here,” Nhiwatiwa said.

The 30th anniversary celebrations drew over 3,000 people comprising bishops, clergy, laity and guests from around the world, including more than 90 from the U.S.

The Africa University choir performed songs tailored for the occasion in which they paid tribute to the institution’s founding fathers and other notable people who have contributed to the development of the institution over the past three decades.

The celebration coincided with the inauguration of the Rev. Peter Mageto of Kenya as Africa University’s fifth vice chancellor.

Chikwanah is a communicator of the Zimbabwe East Conference.

Fall into your Career: Career Fair 

During a press conference on Monday, Nov. 21, representatives for Shaw University, announced that the university has filed an official complaint with the U.S. Department of Justice to “Request for an investigation violations committed by the Spartanburg and Cherokee Counties, South Carolina Sheriff’s Offices.”

Monday, Nov. 21, 2022, at 10:30 a.m., Leaders of Shaw University will share additional details about the university’s official findings and next steps related to the Oct. 5 traffic stop.

Fall into your Career: Career Fair 

On November 16, 2022, Shaw University hosted a career fair in the Willie E Gary Student Union, with a plethora of organizations visiting. Some of the organizations that attended were Duke Health, U.S. Secret Service, Advanced Energy, and many more. Shaw students were given the

The Center for Financial Advancement (CFA)Scholars Program has partnered with Shaw University. Eighteen students were selected based on academics, goals, ethics, interests, and more, to participate in the university’s first CFA Scholars cohort.

Shaw University's School of Arts, Sciences, and Humanities is partnering with Senior Planet from AARP to help people over 50 to be Digital Skills Ready.